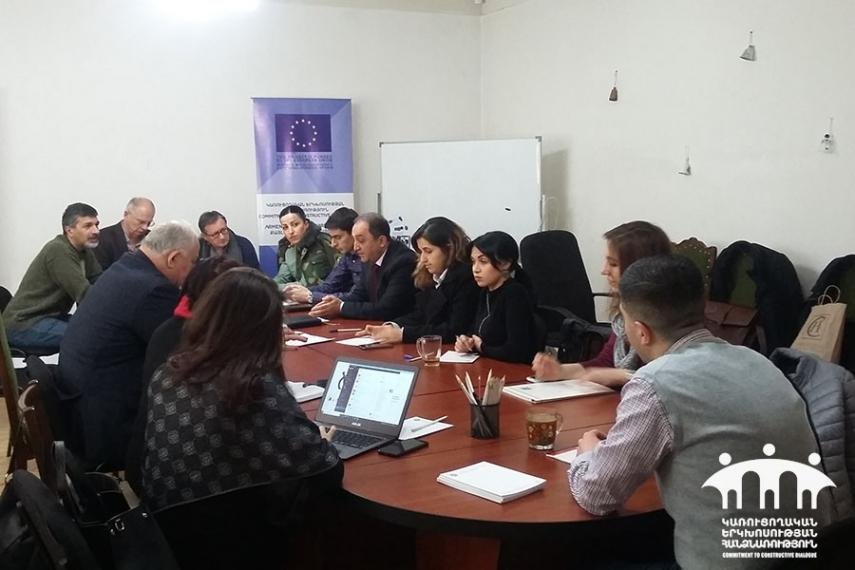 On 27 March, a town hall meeting on a state strategic plan for the establishment of the probation institute organized by the Support for Probation National Network took place.

Arsen Navasardyan, Head of the State Probation Service, Marine Gasparyan, Head of the Department of Social, Psychological and Legal Affairs of Penitentiary Service, representatives of NGOs and international experts attended the discussion.

During the opening speech Artak Kirakosyan, Chairman of the board of the Support for Probation National Network, emphasized the importance of cooperation between different departments in the establishment of probation system.

Representatives of the Helsinki Committee of the Netherlands Mr. Leo Tigges and Mr. Steven Pitts facilitated the discussion. They had arrived in Armenia to present a state strategic program for the establishment of a probation institute.

As a result of these meetings, they collected the main obstacles to the establishment of a conditional early release facility, the scenarios around which the participants discussed in two groups, and then summed in a general discussion. The results of the meeting will be summarized by Leo Tiges and Steven Pitt and will be presented to the Support for Probation National Network.

The Step to Fair Armenia program is implemented by the Civil Society Institute NGO, its partners - Astghatsolk NGO, Foundation Against the Violation of Law NGO, Family and Community NGO, within the framework of the sub-grant program implemented through a consortium led by "Armenian Association of Lawyers " non-governmental organization.
The program budget is 25 million AMD, of which 22.5 million was provided by the Commitment to Constructive Dialogue program. Program duration: from June 1, 2018 to May 31, 2019.
The Commitment to Constructive Dialogue program is funded by the European Union.