“We are developing probation service step by step and sharing our experience”. T.Magradze 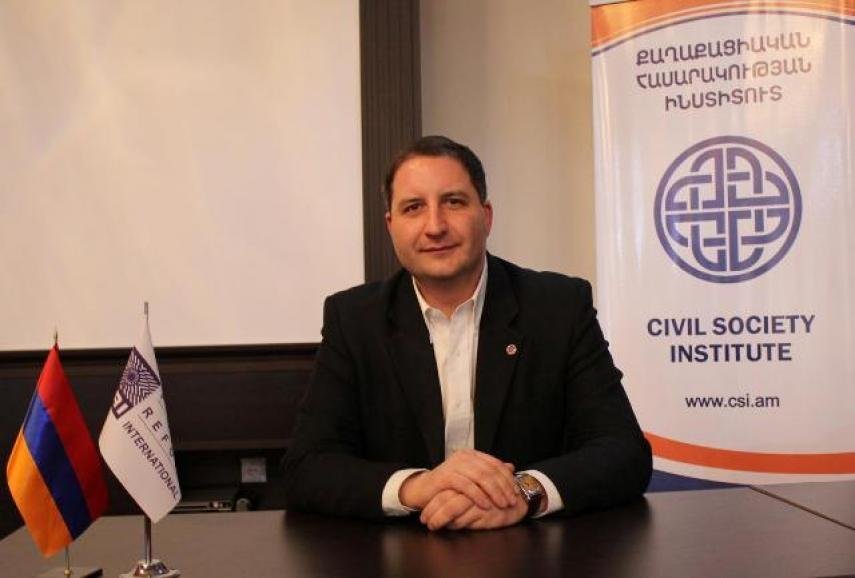 On 2-3 April 2015 in Aghveran, Armenia Civil
Society Institute NGO organized a training seminar on the topic “Specifics of
the functioning of a probation service: experience of the National Probation
Agency of Georgia”. The trainer Mr. Teimuraz Maghradze, the Deputy Head of the
National Probation Agency of Georgia, presented the system of the probation
service of Georgia, its functions, particularities of the establishment and
operation, existing challenges and possible ways of tackling them.

The event was made possible in the framework of
the project “Promotion of the use of alternative sanctions in Armenia,
Azerbaijan and Georgia” implemented by Penal Reform International (PRI) and
funded by the United Nations Democracy Fund (UNDEF).

Mr.
Magradze agreed to give an exclusive interview to www.hra.am which is presented below.

Mr. Magradze, when
the probation service was established in Georgia? What are the functions of the
service and at which stages of the criminal process does it get involved?

In
2001, at the initial stage of its establishment and functioning the Probation Agency
of Georgia operated under the Ministry of Justice. At the second stage in 2009
it became a part of a newly created Ministry, i.e. the Ministry of Corrections
and Legal Assistance of Georgia. It is important to emphasize that one of the
crucial developments in the history of the NPA was the fact that in 2009 it obtained
a legal status of a Legal Entity of Public Law. It means that it is a
semi-independent system, a system with its own budget and management under the
umbrella of the Ministry of Corrections and Legal Assistance.

One
of the main objectives and functions of the Probation Agency is supervision
over probationers, as well as assistance in re-socialization, rehabilitation of
convicts and probationers. The main purpose of the NPA is to help probationers
to change their lives to a better one. For that end, we have probation
officers, social workers and psychologists. Their work is aimed at rehabilitation
of the probationers and prevention of the crime. I would like to emphasize that
prevention of reoffending is a major issue which is dealt with the participation
of our high-qualified social workers, psychologists and probation officers. We
do risk and needs assessment of probationers as well as tailor individual
sentence plan for every probationer.

The
Probation Agency is dealing with the people having problems with law. We work
with ex-prisoners when they leave prison. Our second group of beneficiaries are
those who are sent for probation avoiding the penitentiary system.

Are you planning
to expand the functions of the Agency?

Yes,
sure. We are already developing our system step by step for all this years. We
have founded the institute of social workers and psychologists. So in the beginning
of 2014 we created the Department for the Rehabilitations Programs. In total, 33
social workers, 11 psychologists and 5 members of the management work there.

In
the future we are going to implement new system - electronic monitoring for home
arrest. This is the main goal of our system till the end of this year.

Besides,
one of the most important projects implemented in Georgia at the beginning of
2014 is a system of so called “halfway house”, limited liberty establishment, which
is operated under the umbrella of the NPA.

This
is an establishment without high fences, where persons with limited liberty
have a possibility to leave the territory of the Establishment on weekends and
holidays, visit their families.

The
purpose of the Establishment is to contribute to reintegration of the convicts
into society, rehabilitation and preparation for release.

This
project has been evaluated as a success both by us and the Government that the
next year we are planning to open new establishments for juveniles and women.

What challenges did
you face in Georgia while establishing a probation service which can be useful
for Armenia to avoid such kind of problems?

The
main issue in Georgia, Armenia and, generally, in Caucasus is the mentality of our
people. This has been a challenge for us for many years. So it is very
important to talk to each other, to share experience. I believe that our
experience in this field, lessons learn are very important for Armenia.

It
is difficult to elaborate at this stage what will be useful for Armenia and
what is not. However, it is important that we are learning a lot from our
neighbor countries and our neighbors are learning from our experience, too.

Our
country is not very rich, that means that when coming up with any new project
or initiative we have to justify that the country really needs it. Sure, the
budgetary issues are important and the Georgian Government is guided by its priorities.
It is crucial for us that the Government considers that having a probation
service in Georgia is important. Hence, we are funded by the state budget and
other resources.

When
you implement something new and unknown in Georgian reality, everybody treats
it as a pilot project in order to assess whether that would work or not.
Therefore, it is a big success for us that all projects that we have
implemented in Georgia were successful.

One of the main
issues related to establishment of a probation service in Armenia is financial
aspect. What kind of funding was used to establish Georgian probation agency:
state or donors’?

The
main source for Georgian Probation Agency is state budget. We receive annual
funding from the state budget. On top of that, the NPA, being a Legal Entity of
Public Law, has a possibility to pursue its own income and contribute to its budget;
hence income generated as a result of our own activities is very helpful. Besides,
there are many governmental and non-governmental organizations and donors (PRI,
UNICEF, USAID, EU etc.) who help us to develop, organize working groups and
meetings with international experts, to learn their experience and
recommendations.

From
year to year we receive more and more funding from the Government for
developing the NPA across the country. We are trying to motivate our employees;
every year we try to increase salaries of our stuff at the NPA.

Another concern related
to establishment of probation service in Armenia is the issue of probation officers,
professional background and training for the staff. How this issue was solved
in Georgia? How your stuff was recruited and trained?

As
I have already mentioned, first of all the salary of the staff is getting
higher and higher so we are trying to recruit high-qualified staff for the
agency to ensure achievement of the set goals. We need to train our staff every
year to strengthen their professional capacity. For that end, the Ministry founded
Training Center for penitentiary and probation system. Every year we ask
Training Center to organize many different kinds of training sessions for our
staff and they assist us. 100 percent of our staff is trained every year. Besides,
with the help of our donors and international organizations we invite different
experts who train not only the core staff or probation officers but also the management
and decision makers.

How many people are
employed at the National Probation Agency?

There
are more than 370 employees in the NPA in total, including around 200 probation
officers, 33 social workers, 11 psychologists and management.

Has establishment
of a probation service affected overcrowding in prisons in any way? Has the
prison population of Georgia reduced? Do you have any statistics?

After
the establishment of the NPAwe
were very ambitious and we thought our system was very good. However, we are
still improving it in order to give the Government and courts a real efficient
alternative to imprisonment to be able to send fewer people to prisons and use
the maximum of alternative sanctions. Besides probation, there are many other
alternative sanctions that we are executing that give a possibility to send offenders
not to prison but to the NPA.

I
cannot provide any statistics right now but as a result of functioning of the probation
service and large-scale amnesty and pardon granted two years ago the number of
prisoners has decreased.

We
have psycho-social rehabilitation programs, educational programs, and our staff
works with their family members if they had problems in the family. We try to
involve juvenile probationers into vocational training courses, community and
cultural activities, as well as to help them in schools. So there are thousands
of programs, and we pay a lot of attention on juveniles because this is a
sensitive issue. We try to apply special approach to them.