The Observatory for the Protection of Human Rights Defenders, a partnership of FIDH and the World Organisation Against Torture (OMCT), requests your urgent intervention in the following situation in Armenia.

Brief description of the situation:

The Observatory has been informed by the Civil Society Institute (CSI) about the ongoing judicial harassment and defamation campaign carried out against several human rights defenders, journalists and lawyers including Msses. Tehmine Yenoqyan, journalist, Ani Khachatryan, a member of the civil initiative Armenian Environmental Front, Nazeli Vardanyan, lawyer and the head of Armenian Forests NGO, and Messrs. Levon Galstyan, member of the Armenian Environmental Front, Shirak Buniatyan and Edmon Aghabekyan. The attacks are linked to their activities raising public awareness on the environmental and health risks connected to the operations of the gold mining closed joint-stock company Lydian Armenia in Amulsar, Vayots Dzor region, around 170 km south of Yerevan (see background information). Complaints have been filed by the aforementioned defenders together with local communities impacted to challenge the authorities’ decision to authorise the gold mining operations [1].

Lydian Armenia also filed other civil law complaints against other human rights defenders for defamation. In December 2018, it filed a complaint against Ms. Nazeli Vardanyan, who is a lawyer and leader of the Armenian Forest NGO, for criticising the Amulsar project and accusing the company of having hidden relations with some authorities. The complaint will be examined by the Court of General Jurisdiction of Yerevan, but no date has been set yet.

On August 10, 2018, Lydian Armenia filed a defamation complaint before the Yerevan Court of General Jurisdiction against Mr. Levon Galstyan for criticising its operations in public interviews, on Facebook statuses and on the Armenian Environmental Front’s webpage (Court Case No. ԵԴ/16785/02/18). The trial is ongoing.

In March and April 2019, Lydian Armenia also filed a defamation complaint against Messrs. Shirak Buniatyan (Court case No. ԱՎԴ2/0560/02/19) and Edmon Aghabekyan (Court case No. ԱՎԴ2/0551/02/19) for questioning the legitimacy of operations conducted by Lydian Armenia in a Facebook post and at a public gathering. The company also asked them to pay one million Dram (approximately 1,870 Euros) in compensation for undermining its business reputation.

In addition, since 2018, the same defenders have also been regularly targeted by a smear campaign on social media. Fake Facebook accounts have been publishing approximately 40 video materials discrediting Mr. Levon Galstyan. Offensive sexist posts have been published on Facebook against Msses. Ani Khachatryan and Tehmine Yenokyan, describing them as ‘loose women’, ‘made pregnant by activists’ and so on. In April 2019, Levon Galstyan, Tehmine Yenoqyan and Ani Khachatryan applied to the Yerevan Court of General Jurisdiction to seek remedy for insulting materials published on Facebook against them. On May 3, 2019, a video made up to discredit Ms. Nazeli Vardanyan’s professional skills as a lawyer of was circulated through a fake Facebook page named ‘Green and Clean’, which was subsequently closed down by Facebook due to reports by users that the page was offensive and defamatory.

Furthermore, Ms. Tehmine Yenoqyan filed another complaint to the police on September 6, 2018 in relation to video and photo materials containing abusive comments, circulating on Facebook, and based on the video surveillance of her house in Gndevaz village. The police opened a criminal investigation, which led to the identification of two individuals in relation to the camera surveillance and the fake Facebook accounts, who are connected by working relations with Lydian Armenia. The case was then closed by the Vayots Dzor Regional Prosecutor’s office. Ms. Yenoqyan then requested the Ararat and Vayots Dzor District Court of General Jurisdiction to consider the case.

The Observatory expresses its deepest concern over the judicial harassment and smear campaigns against Msses. Tehmine Yenoqyan, Ani Khachatryan, Nazeli Vardanyan, Messrs. Levon Galstyan, Shirak Buniatyan and Edmon Aghabekyan and all environmental defenders, as they seem to be only aimed at punishing them for their legitimate human rights activities. The Observatory calls upon the authorities of Armenia to protect the rights of human rights defenders and to carry-out an immediate, thorough, transparent investigation in order to identify all those responsible for the violation of their rights, bring them before an independent tribunal, and apply them the sanctions provided by the law.

Approximately 400 mines, of which 22 are metal, are exploited in Armenia. All mining sites are close to inhabited areas and water resources, raising numerous issues in terms of health, water and food safety and environment.

In 2007, the mining company Lydian Armenia CJSC, subsidiary of Lydian International, started its operation of exploration and feasibility for a gold mine extraction project in Armenia. In 2014 the company was granted a mining licence and in 2016 it started the construction works for the extraction project in the Amulsar region.

Since 2012, experts and activists have been denouncing the negative impact of mining operations in Amulsar on health and the environment and since 2017 some residents blocked the access to the mine and asked the suspension of the project In response, Lydian Armenia started a vigorous campaign to silence all critics, including human rights defenders.

In November 2018, approximately 3,000 citizens from the Jermuk enlarged community, in which Amulsar is situated, signed a petition to stop the project, and on December 18, 2018, the Council of Jermuk Community took the decision to develop Jermuk Community as an environment friendly economy and prohibit metal mining on its territory. Since August 2018 the project is suspended pending a new environmental impact assessment that has been commissioned by the government.

Please write to the authorities in Armenia, urging them to:

i. Put an end to all acts of harassment, including at the judicial level, against Msses. Tehmine Yenoqyan, Ani Khachatryan, Nazeli Vardanyan, Messrs. Levon Galstyan, Shirak Buniatyan, Edmon Aghabekyan, as well as of all human rights defenders in Armenia and ensure that they are able to carry out their activities without hindrance;

ii. Carry-out an immediate, thorough, transparent investigation into the above-mentioned defamation acts in order to identify all those responsible, bring them before an independent tribunal, and apply them the sanctions provided by the law;

iii. Conform in all circumstances to the provisions of the Declaration on Human Rights Defenders, adopted on December 9, 1998 by the United Nations General Assembly, in particular its Articles 1 and 12.2.;

iv. Ensure in all circumstances respect for human rights and fundamental freedoms in accordance with international human rights instruments ratified by Armenia.

Kindly inform us of any action undertaken quoting the code of this appeal in your reply.

The Observatory for the Protection of Human Rights Defenders (the Observatory) was created in 1997 by FIDH and the World Organisation Against Torture (OMCT). The objective of this programme is to intervene to prevent or remedy situations of repression against human rights defenders. FIDH and OMCT are both members of ProtectDefenders.eu, the European Union Human Rights Defenders Mechanism implemented by international civil society. 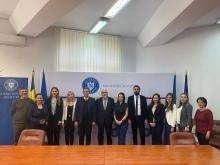 Anti-Corruption Experience Exchange Between Romania and Armenia: Study tour
On May 2-6 the Caucasus Institute and the Expert Forum (EFOR) (Romania) organized a visit of an Armenian delegation to Bucharest in the framework of... more