Amulsar gold mine: a test for Armenian democracy, a human and environmental failure for development banks 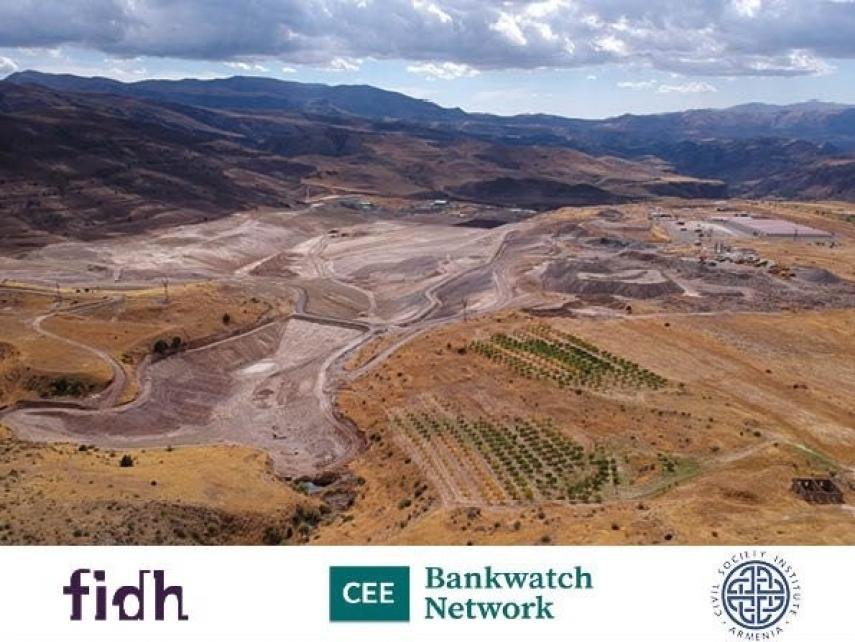 For 15 years, two of the world’s largest development banks financed an Armenian gold mine that harmed the environment and the rights of local communities. Civil society activists were critical of the mine, blocking its entry and taking the case to court. Weakened by the armed conflict with neighbouring Azerbaijan, the Armenian government, elected after the 2018 Velvet Revolution amid promises of democratic reform, wants to reopen it and just passed a law that could weaken civic participation in mining projects.

Paris, Yerevan, 28 June 2022 - The International Federation for Human Rights (FIDH), its Armenian member organization, the Civil Society Institute, and CEE Bankwatch Network, publish a report today on the multiple human rights and environmental abuses linked to the Amulsar gold mine project in Armenia. Located in a particularly sensitive area, home to several protected species, rivers, and water reservoirs that are vital to the nearby spa town of Jermuk, the project has been plagued by major risk management problems and allegations of corruption since its inception in 2007.

Taking advantage of Armenia’s opaque governance of natural resources, Lydian, a company listed on the Toronto Stock Exchange until 2020, developed the project without seriously consulting local affected populations. As early as 2018, 85.7% of the surveyed inhabitants of Jermuk reported impacts on their health such as asthma attacks, lung diseases, headaches, and insomnia.

"During the Velvet Revolution, Armenians’ voices grew freer and mobilization against the project became very strong. Our protest is based on serious assessments provided by dozens of independent experts and on reliable scientific data. After all these years, we have the right to challenge unreasonable and anti-democratic decisions," said Inga Zarafyan, president of EcoLur informational NGO. "But the mining company is doing everything it can to stop us."

In 2018, Lydian launched no fewer than 20 "SLAPP suits" – legal actions designed to silence or intimidate – against human rights and environmental defenders, journalists, and even a member of parliament. Critical voices are regularly subjected to smear campaigns. Despite such smear campaigns and repression, the neighbouring populations set up a blockade at the entrance of the mine that lasted over two years, from 2018 to 2020.

The report highlights the failure of the European Bank for Reconstruction and Development (EBRD) and the International Finance Corporation (IFC, a branch of the World Bank) – two multilateral development banks that respectively supported the project from 2007 to 2017 and 2009 to 2021 – to uphold their human rights and environmental obligations in accordance with international standards and their own policies. The development banks have so far refused to shoulder any responsibility for the project's failures or to provide remedy for the damage caused to local communities. In 2014, the EBRD's internal grievance mechanism held that two complaints filed by affected people were ineligible, before the bank's new complaints mechanism finally launched a compliance investigation in 2020, which is ongoing.

“The IFC and the EBRD failed to bring high standards of transparency, participation in decision-making and accountability to the mining project. Instead of leading by example and adding value, the EBRD refused to communicate to civil society about Amulsar and tolerated dozens of SLAPPs   by Lydian, which was unprecedented in our experience. I hope the EBRD's accountability mechanism will soon deliver a critical review and recommendations for effective remedy,” said Fidanka Bacheva-McGrath, strategic area leader at CEE Bankwatch Network.

The future of Amulsar: a test for Armenian democracy

Amulsar can be seen as a test for Armenia’s young democracy, which in three years has experienced a revolution, the consequences of the pandemic, and then a harsh armed conflict that has caused heavy human, moral, territorial, and economic losses.

Under intense diplomatic and economic pressure, the Armenian government approved a five-year action plan in November 2021, that included exploitation of the Amulsar mine.

In addition to recommendations to the development banks and Lydian, the report calls on the Armenian government to revoke Amulsar's licences and urgently implement all of the recommendations of international experts from the UN and the Bern Convention who have reviewed the situation.

“We are concerned by the recent turn of events in Armenia. The government seems to be enacting dangerous reforms that could further weaken citizen participation in decision-making around mining projects, instead of learning the lessons from Amulsar. Yes, reform of mining regulation is needed. But only if it prioritizes the effective participation of affected communities and the protection of human rights and the environment,” said Artak Kirakosyan, director of CSI and vice-president of FIDH.

AMULSAR: HUMAN RIGHTS VIOLATIONS AND ENVIRONMENTAL NEGLIGENCE IN THE SEARCH FOR GOLD. Report